Oh man where to begin. Yet another illustrious food weekend has come and gone and left it’s memories simmering in my mind. It all began Friday afternoon. While finishing up some work at the office, I thought that carnitas would be delicious. Now that I have a dutch oven, courtesy of Susy & Dave C Give Willie A Dutch Oven For Xmas, I decided to take on the 3-hour long process. I picked up a pork shoulder at T.I. and headed home with my 4 lb chunk of meat. Carnitas are surprisingly simple and thanks to the insights of the aforementioned Dave C. and the wonderful guidance of Deb, it was a cinch. I cubed the pork and put those gnarly fellas into the DO with water and a tablespoon of salt. While it simmered for 2 hours, did some kitchen dancing and some reading on Wired. I made friends. I made enemies. I became a Sherpa. I became licensed in giraffe conservation. Then I turned the heat up and boiled that water off. People, thehousekitchen smelled ameeeeeezing. After the water had boiled off and it was just rendered fat and delicious crisps the carnitas were ready to be swaddled in their warm corn tortilla blankets with some onion and guacamole and a little bit of shredded cheese. I forgot to get cilantro, which would’ve been a great addition, but I got lazy.  Kiko enjoyed them with me. We pigged out (pun intended) because it was pretty late by the time everything was ready, but it was so good I forgot all the training from my giraffe conservation classes.

The next morning I went to Kim and Kiko’s to make some french toast, not expecting Kiko to be there, but she was! Kim and I started cookin’ and simultaneously yelling at Kiko to get out of bed and eat with us. All she said was “ohhhh I’m not hungry oooohh I slept for 12 hours” and all we heard was “keep barging into my room until I eat french toast with you guys!” I bought cinnamon raisin bread from the Med and it fared excellently as french toast fodder. Twas a pleasant morning and as it gave way to a pleasant afternoon I headed home to fall asleep at 8:30 like a bawss.

Twelve hours later I awoke from my bear-like slumber and just like a bear, I made and drank an entire french press of coffee by myself. Kiko came over for brunch (we made these plans earlier in the week) and I made french toast again with leftover cinnamon raisin bread. But this time, I saw a chicken breast in my fridge and decided to hop it up a scotch and lay down some sweet and salty bizniz. Salt, pepper, and some brown sugar went onto the chicken and then I baked it for about 20 minutes at 350. I sliced the chicken up and laid it onto a couple slices of french toast then drizzled it with grade A maple syrup. Once again ameeeeezing. Kiko was sated, as was I.

Before chicken and french toast

We retired to the living room to watch some Adventure Time and Kiko fell asleep for a while. She looked so peaceful I didn’t want to wake her.  What a great way to end a weekend. 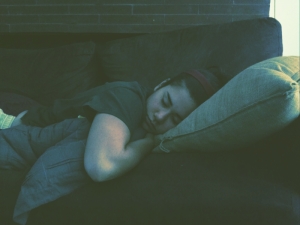 After chicken and french toast