While reading an article about zen on Wired, I had a life-changing idea. The article itself narrated the meditation and pseudo-Buddhist practices of much of Silicon Valley’s top floor thinkers and doers, like Google and Facebook. It explained some forms of meditation and I began to think of my own forms.  cooking is probably up there, I thought. And then: inspiration. I’m not sure if the mere notion of thinking about being enlightened beamed this unforgettable idea to my brain or if by some near-magical occurrence I became enlightened for a brief moment, but the idea flourished in my head like a scene from Fantasia, spiraling and dancing playfully. Say hello to the Grillzone™.

The Grillzone™ is essentially a grilled calzone. But it’s also so much more than that. It’s a means of expression. It’s a way of life. Since I had made pizza dough the night prior, the timing was impeccable to have this enlightened idea. I drew a schematic of the Grillzone™, a cross-section image of the stuffed dish. Originally, the plans called for a beef patty, however in a last minute decision, I substituted the patties for the ease and simplicity of keeping the ground beef in pieces. This decision was no problem because I am a maverick and make decisions like that all the time. I sauteed onions in a cast iron skillet and then added the ground beef, lightly seasoned. The kitchen already smelling great, I rolled out three little balls of dough (the wonderful Lauren and Daniel were over to enjoy my genius). I grated some whole milk mozz and waited for the grill to be ready. At the appropriate time (no timer necessary, it’s something that you feeeeeel), I began building each Grillzone™ with love and care. Daniel whipped up some mushrooms in red wine for me as I assembled Lauren’s savory delight. The fully loaded Grillzones™ began with the ground beef and onion mixture, and then were piled high with spinach, mozz and mushrooms. I scored the top of each  one, drizzled some olive oild and put them on the grill for approximately 20 minutes. The grill was a little bit cooler by then so I just covered the them with the grill top and let them do their thang. When they emerged I felt like the proud father of triplets. Really delicious, cheese sizzling triplets. It seems like it may be some sort of psychological issue, my affinity for feeling the pride of fatherhood when making dishes, like I did Delilah at Thanksgiving. I won’t worry about that now though. Each equipped with a Grillzone™, the three of us topped our meals with some vodka sauce and went out to the porch to enjoy our dinner with some 2 Buck Chuck. A wonderful evening with great food and even greater people. 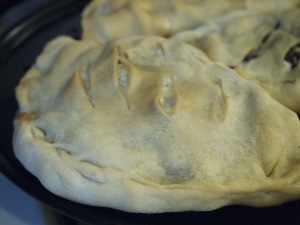 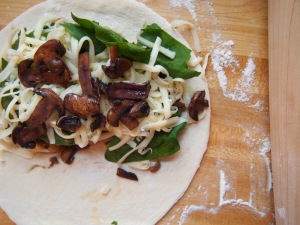